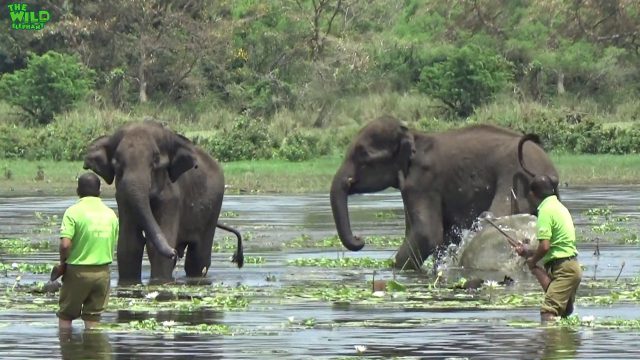 “Hakka patas” is one of the most dangerous and inhumane weapons invented to kill wild animals that roam close to villagers. It is a mixture of explosive matter, iron and lead made into a ball-shaped charge. It is easily hidden inside giant vegetables and fruits as a ”Hakka patas” explosive mixture. Many animals that move into raid crops get caught with this trap and dies. The government and wildlife officers have always asked with kind words to refrain from using such cowardly methods to harm wild animals and their lives.

This situation happened in Anuradhapura when some villagers saw this elephant while they were on a trip to pluck herbs around this forest area.
Wildlife officers came to this scene to help this elephant as they spotted large wounds around its mouth. This is a severe case, and this elephant is in pain.

Officers will use tranquilizer guns to shoot sedating drugs to this elephant as they chase after this elephant for a while. This elephant will have to be controlled and given with more care and medicine, saline supplies to regain strength and life. This sure will be a case for these officers where they will have to take this elephant back to their facility to start treatments.

A humble elephant gets a free pass to a national park. (Rescue and Relocate)

Elephant Hit by a Vehicle: A Tragic Ending for the little one

Spotting a beautiful elephant herd by a man-made tank

Never leave your vehicle and try to run vs. an Elephant