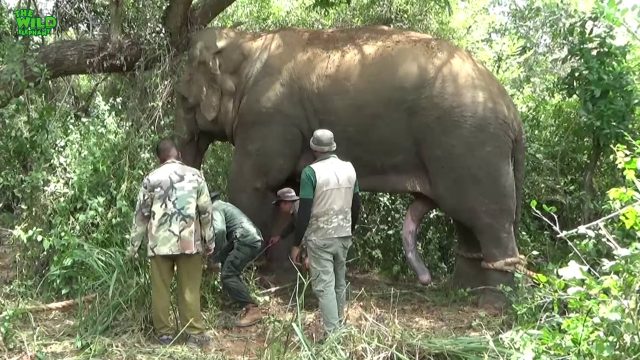 Sri Lanka is a home for wildlife sanctuaries full of Elephants that roam the streets and through village areas freely in many regions of the country. The small island nation is full of elephants that are loved by most of the inhabitants of the island. Most educated in the country are continually fighting corruption, and animal abuse, especially towards the treasures that elephants are to the state as Sri Lankan elephants are known as the largest and the strongest among Asian elephants.

This particular footage is about a giant elephant who towers many in the region having a walk out of the conserved zones towards the human villages and farmlands close by. This giant male elephant was spotted in Anuradhapura as it has moved out from the conserved zone close to farming villages in the region. This is a life-threatening situation for both villagers and this elephant as people are concerned about their safety and their crops that earn them their living. These Sri Lankan elephants need no introduction as they are the biggest in Asia and the strongest as well. The safety of humans and both these elephants come as a top priority for the wildlife department and their officers and to move this elephant away.

First, they need to control this elephant, and they managed to do that using a large, strong rope that can keep the elephant locked down. These wildlife officers will feed, vaccinate, and supply medical checkups necessary for its health meanwhile. The officers will be waiting for the Truck to arrive that is custom made to transport elephants towards national parks, conserved zones, etc.

Such risky missions for wildlife department officers are life-threatening ones, but they do it as a part o their job and also for the love they have for the elephants on the island. This national treasure must be safeguarded, and it starts with helping every single elephant in need.
The entire country loves elephants as they are part of their culture and heritage through ancient times.

A Wildlife Team Looks After Cute Little Elephants: A touch of humanity

A DAM TRIES TO SWALLOW AN ELEPHANT, HUMANS SAID OTHERWISE.

Faith In Humanity, Saving an elephant from Plastic pollution

A baby that lost its mother, rejoins a new home for elephants