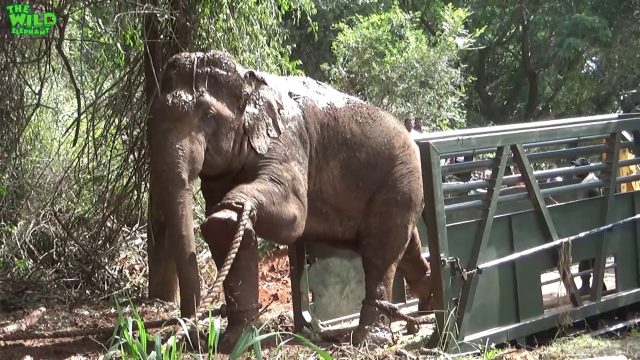 The beautiful island of Sri Lanka is a home for wildlife sanctuaries full of Elephants that roam the streets and through village areas freely in many regions with greenery around. The small island nation is full of elephants that are loved by most of the inhabitants of the island. Most educated in the country are continually fighting corruption, and animal abuse, especially towards the treasures that elephants are to the state as Sri Lankan elephants are known as the largest and the strongest among Asian elephants. Elephants are considered as a part of Sri Lankan culture and history, and this island was full of elephants over the past during ancient times.

This part 2 of the video comes after the is about a giant elephant who towers many in the region having a walk out of the conserved zones towards the human villages and farmlands close by. This is a life-threatening situation for both villagers and this elephant as people are concerned about their safety and their crops that earn them their living. These Sri Lankan elephants need no introduction as they are the biggest in Asia and the strongest as well. The safety of humans and both these elephants come as a top priority for the wildlife department and their officers and to move this elephant away.

Watch how these hardworking individuals managed to complete this mission with limited logistic support and with the aid of villagers in the area. This scale of massive elephant relocation missions aren’t that rare in the island and for many that live near such places gets to witness these several times per year. Such risky missions for wildlife department officers are life-threatening ones, but they do it as a part o their job and also for the love they have for the elephants on the island. This national treasure must be safeguarded, and it starts with helping every single elephant in need. The entire country loves elephants as they are part of their culture and heritage through ancient times.

The Elephant That Won’t Get In: A Story of A Patient Wildlife Team

The youngest Titanic Tusker with the sharpest looking tusks

An incredible moment, saving a young elephant knocked by a train

Books About Elephants: Must read list for kids and Adults A Detailed Quick Guide.