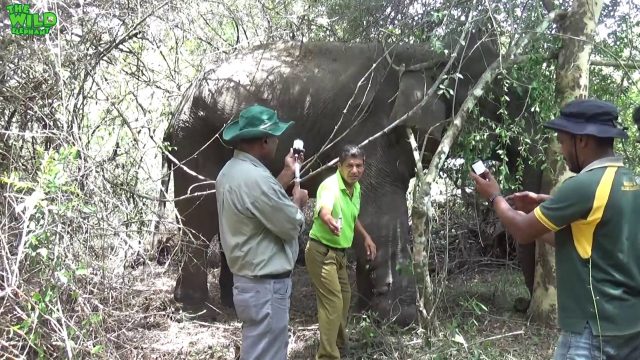 The small island nation is full of elephants that are loved by most of the inhabitants of the island. Most educated in the country are continually fighting corruption, and animal abuse, especially towards the treasures that elephants are to the state as Sri Lankan elephants are known as the largest and the strongest among Asian elephants.

This particular footage is about a humungous elephant that was targeted by a group of individuals who thought it was a good idea to hunt elephants in Anuradhapura for trophies. This elephant has been a wandering giant in the area which is most loved and respected by the inhabitants in the nearby villages that engage in farming. It was shot in the leg, and this elephant has fled the area towards the jungle to avoid any other threats.

Wildlife officers arrived at the scene to treat this elephant as soon as the villagers called and notified the department of wildlife about this situation. They arrived with essential medicine and vaccinations to asses the situation and to make plans for treatments required to save this elephant from having an infected leg that can leave the elephant disabled. These kind of missions for wildlife department officers are life-threatening ones, but they do it as a part o their job and also for the love they have for the elephants on the island. This national treasure must be safeguarded, and it starts with helping every single elephant in need. The entire country loves elephants as they are part of their culture and heritage through ancient times.

Somersaulting elephant saved from a canal

Young Tusker is waiting to destroy an electric fence

Books About Elephants: Must read list for kids and Adults A Detailed Quick Guide.