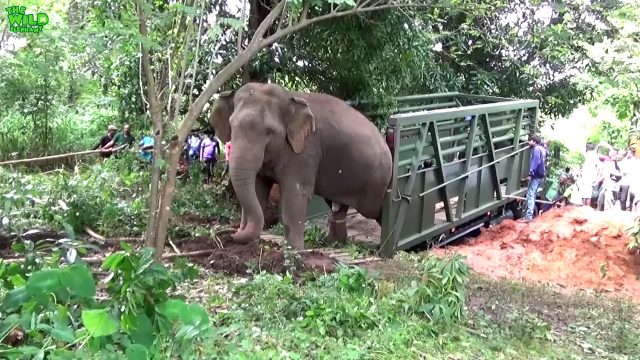 Transporting giant elephants aren’t some easy task for people who seek daily jobs. This is a job given to those who are responsible for keeping the lives of people and wildlife safer while honoring their rights to live in peace. Transporting giant wild elephants from such conflicting areas is crucial to keep the lives of both sides safe. It is a fact that most of the elephants on the island are adventurous and would roam freely to human territories as they please whenever they are given a chance.

This situation was recorded when a giant moved to a village area in the rural regions in Sri Lanka. The concerned villagers called on the wildlife department to intervene and to secure the elephant. It was a night when they started the operation and to keep the elephant in place until the morning arrives. At that time they moved on to sedate the elephant and tie it down so it could not panic or rampage across the village.

It was a beautiful sunny day when the sun came up again. The elephant was tied down, and it was a massive and a strong one who is full of aggression at the time. This giant was charging at whoever that stayed ahead of him. During that time, the large transport truck designed to carry such large animals came to the scene.

It is quite a difficult task to get an elephant moving and especially towards a cage sort of place as they will naturally react to avoid that. This is why this elephant is tied and faced the other way. The truck is placed into a hole that helps it to level the cage entrance with the ground that the elephant is on.

It took some time, but calmly they were able to load the elephant to the truck. The elephant felt the trap also did try to resist, but it was another heavy vehicle that was pulling the elephant using those massive ropes so it could not overpower. This elephant will be taken to a safer area with no human problems and other threats. This elephant will also be able to live with many other elephants in that area calmly.

We humbly invite you to join us with a journey full of love and help to our treasured wild elephants in the paradise island of Sri Lanka.

Young Tusker is waiting to destroy an electric fence

Amazing recovery for a young elephant

Wild elephant eating garbage! This is how humans will wipe out the elephant population