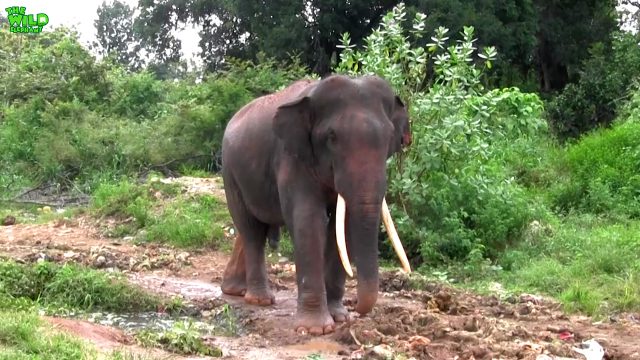 This footage is about a healthy young tusker with a herd, these kinds of tuskers are very rare to see among Asian elephant species. They are valued as a national treasure at all times as a loss of one life is a significant blow on the very small percentage of tuskers living today.

Take a moment to watch these amazing living beings roaming around being themselves, who are we ti hamr them? We all should be thankful for nature, and we all should be fighting the wrongdoers with laws and education to prevent further loss of their lives. Elephant populations all over the world are highly threatened as we speak. The numbers fall every year even though they are much slower now.

In the island paradise of Sri Lanka, Elephants roam the streets and through village areas freely in many parts of the country. The small island nation is full of elephants that are loved by the citizens of the island. Most educated in the country are continually have stood up against corruption and animal abuse especially towards the treasures that elephants are to the state as Sri Lankan elephants are known as the largest and the strongest among Asian elephants.

Sri Lankan Elephants are known to survive passing averages age known to them due to the current regulations and support given to the wildlife department to keep the elephants safe. There are many aged elephants in the country that requires weekly check-ups on their health, most of them are iconic to some areas and are given with special names by the clergy.

We Donated to Udawalawe Elephant Orphanage with your help

Scenery of a tusker making friends in a new herd. Calming footage to start...

Revisiting the Humble elephant with a tumor in his leg. Gets treated by officers