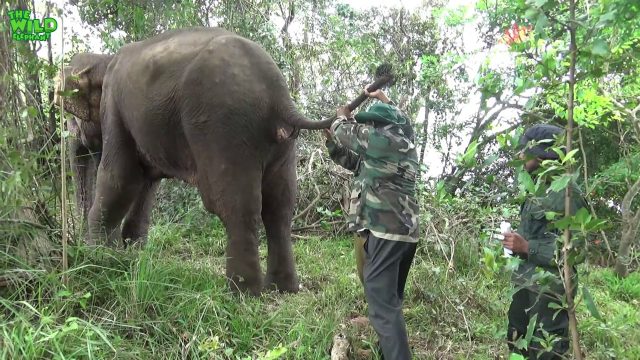 Through history, some people celebrated people like James H. Sutherland who shot 1300 – 1600 of these beautiful creatures in Africa. He returned to London with the name given to him by the people as the “World’s greatest elephant hunter.” Not for us elephant lovers though.

This happened in Anuradhapura, a little away from the town towards farming villages that borders wildlife sanctuaries kept for wild animals. Some hunters sneak in to hunt wild boars and other small animals in this region whenever they find a window of opportunity. This is a crime punishable by law in the island, and they still do it for the trill.

In this footage, we are trying to highlight how the other and the better part of humanity attempts to save this giant from an unfortunate end. It is not an easy task to give treatments to a giant like this. The wildlife officers are risking their lives in this process of saving this elephants life, and they will be committed for weeks to come to restore the elephant’s life completely.

Watch the footage on how these villagers are passionate about saving this elephant. This is what we need from every human being, to care about these animals to live to see several more centuries and to survive extinction.

A Sick Elephant Gets Medical Attention: Wildlife deserve the best too