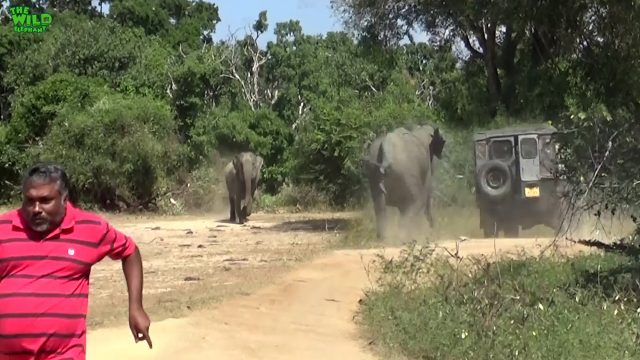 WIldlife officers and vet teams are tasked daily to visit and treat elephants and vaccinate them routinely to make sure they are healthy and well. Sometimes when they travel around, they spot elephants that are trapped and baby elephants separated from their herds. In this instance, they spotted a baby elephant, and a mother separated from a herd that roams this area. They expect to find the main herd near water source close by as its day time and the temperatures are up.

They immediately started preparing their medicine to vaccinate these elephants, but with previous experiences, the elephant mother began to chase after these officers with no warning. The Jeep accelerated and moved away from the chasing elephant as fast as possible. You really don’t want a chasing elephant to catch you at all.

The final scenes were when the confused and angry baby elephant started chasing after the team and officers who wanted to get close to this elephant. Don’t let their cuteness fool you, and these baby elephants are sometimes very angry and vicious as they charge to ram you. It looks funny, but you don’t want to be the one to be chased by a baby elephant that is a little angry or confused.

In the beautiful island of Sri Lanka, Elephants roam the streets and through village areas freely in many regions of the country. The small island nation is full of elephants that are loved by most of the inhabitants of the island. Most educated in the country are continually fighting corruption and animal abuse especially towards the treasures that elephants are to the state as Sri Lankan elephants are known as the largest and the strongest among Asian elephants.

An Injured baby elephant that can’t stand up meets the Kindness of Humanity. Awesome...

Help For The baby elephant That Was Stuck In The Mud

Saving a young elephant from a Hakka Patas. Aftermath