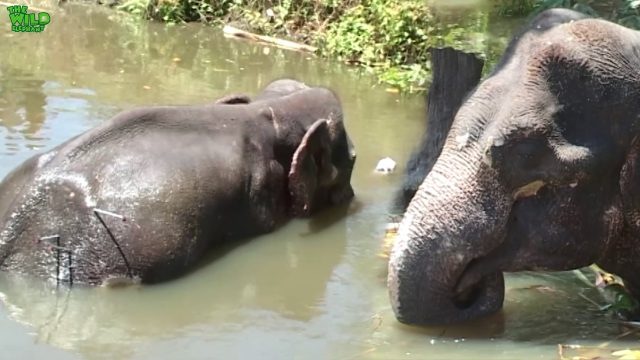 This video footage immerged from Polonnaruwa where this elephant was shot by some hunters or some angry farmers who had enough of this elephant raiding their crops. There are many stories like this as thousands of elephants roam the lands close to human villages. However, around farming villages where elephants raid crops, many conflicts are happening that have caused casualties to both sides. They have set a lot of fences and electric fences with barriers around many villages and farmlands around national parks and many massive forest reserves. These elephants often run into traps and wells placed along with farms for water supply.

This elephant has managed to escape the scene and has moved towards a pond where it can find plenty of water to drink while keeping itself cool. When elephants are injured, they tend to move towards massive water sources as they help them to float a little also to maintain their balance. The villagers saw this and quickly notified the wildlife department to come and intervene with this issue.

Officers arrived with the necessary medicine and also tranquillizer guns so that they can inject this elephant at a distance. This elephant needs to be helped, and they need to come up with some plan before time runs out. Luckily, these kind villagers provided the injured elephant with plenty of food as many others kept bringing more for this elephant as well as for the hard-working wildlife officers.

Funday For Elephant Playmates: Two Calves In Their Own Paradise

Humble elephant waits till humans work to get him out from a pit, then...

This giant elephant is suffering from a Hakka Patas Trap. Wildlife officers came in...

A Young elephant saved by humans