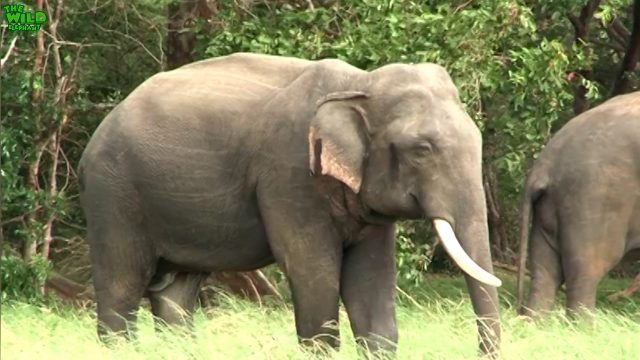 This tusker isn’t that much old as you think it is. But this elephant has already lost one of its precious tusks to another elephant already. The Musth season fights are insane and are some fights to be seen. This tusker had a pretty violent fight with another tusker in the herd and is very lucky to survive, and it is not clear about the wounds present in this elephant’s body as medical teams want to confirm about this elephants health shortly.

The footage regarding the fight is not available to us at the moment, we would like to share the footage with you soon as we are searching for clear footage. It sure is painful to lose a tusk like that, please watch and spread awareness among friends to show how precious these animals are and why we must keep them safe for the future centuries to come.

This is a periodic condition in male elephants, characterized by highly aggressive behavior and accompanied by a massive rise in reproductive hormones. The boost in Testosterone levels in an elephant in musth can be as much as six times greater than in the same male at other times. This hormonal surge might be the sole cause of the musth period or just a contributing factor. It is complicated for scientific observations to determine this as even the calmest and tamed elephants become super aggressive during the musth period.

In the island paradise of Sri Lanka, Elephants roam the streets and through village areas freely in many parts of the country. The small island nation is full of elephants that are loved by the citizens of the island. Most educated in the country are continually have stood up against corruption and animal abuse especially towards the treasures that elephants are to the state as Sri Lankan elephants are known as the largest and the strongest among Asian elephants.

Sri Lankan Elephants are known to survive passing averages age known to them due to the current regulations and support given to the wildlife department to keep the elephants safe. There are many aged elephants in the country that requires weekly check-ups on their health, most of them are iconic to some areas and are given with special names by the clergy.

The Beautiful Sight of Elephants by the Parakrama Samudraya. Mother Nature is amazing

A feel Good story: A Weak Elephant gets treated and helped to stand up